This Sunday Simon and I followed Colin and John over to Brookfield Farm for their annual Microlight fly-in. Well when I say followed we were some 20 mins behind them. We took off from Chatteris and planned to route via Coningsby’s MATZ and pass through their overhead, however after a few unanswered calls we decided to divert around as the cloud base was not sufficient to go over the top, this added around 10 mins to the journey and we had already considered this as a backup route. One of the many great SkyDemon features is while in flight a simple tap on the route line unlocks the currently planned route and then we simply dragged it wide of Coningsby’s MATZ and we were all set.

I’m pleased to say PilotAware held firm again for the whole trip showing traffic around us, the only time we had to change our plans was on the return but more about that later.

On arrival at Brookfield Farm there was some confusion as we heard an aircraft call right base and the plates showed all circuits to be left hand, a radio call and someone confirmed 31 was a right hand circuit, as we joined and called joining 31 RH an apology was heard and a correction runway 31 was indeed LH so we changed and joined 31 Crosswind. The approach looked good coming in over some lakes but my touchdown was a little long and the runway a little short! Time to play it safe and do a go around needless to say it was actually a planned flypast, I wanted to buzz the tower (honest)!!! 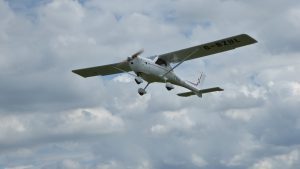 On my second attempt I was down a lot soon and made the first exit with ease.

The fly-in hosted by Phil Read and Jin Wiles who greeted each and every pilot with a warm welcome they also laid on a good spread of food including a wide selection of cakes and hot and cold drinks all for free! 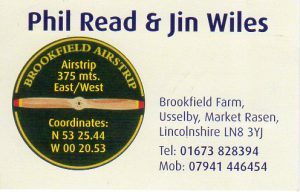 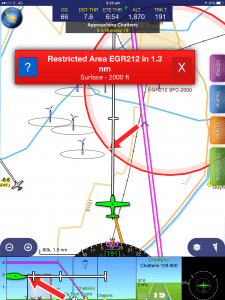 After spending a few hours there we decided to depart and flew back to Chatteris via the  same routing. As we approached march we made our call that we were inbound and a few seconds later we heard Pat call that he was inbound from a similar position, we looked but could not see him. We zoomed out a little on SkyDemon and there Pat was 600ft below and a little off to our left side, we then managed to locate him visually too, we made radio contact with Pat reporting our position and intent, we went around to the north west and joined downwind while he went to the east and joined on the base leg. I’m sure we would have seen each other eventually without PilotAware and SkyDemon, however having that early representation on the map is a great help.

Unfortunately, not all aircraft are equipped with ADSB Out we added it to ours and Pat’s for around £50 each. I just don’t understand why the CAA don’t mandate it or why people won’t spend £50 on adding ADSB Out to their existing Mode S transponder!