Another fun day to fly with variable and gusty wind and some light rain too!

Today was too windy to go solo and we were back on my least favourite runway used so far 21 (see previously posted the curse of the trees here ). Today’s lesson was mainly about leaving and rejoining the circuit, after taking off on 21 we climbed to 1,300ft, about 200ft below the cloud base and then turned towards Ely which we could see in the distance. I flew out to the drains and then turned through 180 degrees and came back towards Chatteris airfield, I knew it was ahead of me, but I could not see it at first. As we approached it Mike asked how I planned to rejoin the circuit for 21, my plan was to fly to the left and then come around and join on downwind, Mike had a better idea carry straight on and join on base leg, so long as I was down to circuit height before joining. I throttled back to 3,000 rpm and descended to 700ft, there was a lot of turbulence probably the most I have experienced in the microlight to date, I made the radio call to say we were joining base leg and proceeded to land. My approach was a little low so I added more power and came in well clear of the trees, in fact to high and a I rounded out to high also, so power on and around we went. We just flew the circuit this time and my landing was better, but not good so around we went again and this time it was acceptable. After climbing back up to 1,300ft we headed towards Ely once more and then back to the airfield, the weather was getting worse now with stronger gusts!  I spotted the airfield a little sooner this time and flew us back for a touch and go, the approach was quite good this time as was the round out, but then the aeroplane suddenly went up, thinking I must have ballooned I put the power on and went around, puzzled I asked Mike what I had done wrong, but for once it was not me, but a gust of wind that blew at an inopportune moment. We went back out towards Ely once again and as soon as I had turned back towards the airfield I spotted it, I think I must be getting used to seeing it, I flew us back for the last time and made probably my best landing of the day in what has to be the most challenging conditions I have flown in to date.

Shortly after I had refuelled  the aeroplane Simon arrived for his lesson, sporting his newly acquired headset, a nice pair of DC 10-13XL’s, he is just starting on circuits and made a couple of 50ft passes over the longer wider runway 19, however the weather continued to deteriorate and his lesson was cut short. Simon also has a share in the C42 so needed to refuel it after his lesson, he got his new Jerry can out and this is when we found out not all jerry cans are made equal, unfortunately his has a breather tube that restricts the opening to the point where we could not get the pipe from the pump in. Thus it’s worth checking this before buying a can, they should also have a UN number stamped on them. My Wavian Jerry can seems a good choice and Simon is now going to get the same.

Time for some tea and cake back in the club house!

The blog hit a new high on Friday 24th Jan with 75 visitors in one day, I know it’s no Google or BBC but I was very pleased nonetheless.

Top search terms were “learn to fly” followed by “Microlight VFR” and then “e-Go”. The user stats have been bouncing around, as can be seen from the graph with a previous high of 66 (not on the graph) when a blog contained the words “engine failure” in the title, just goes to show how people like to read about drama. 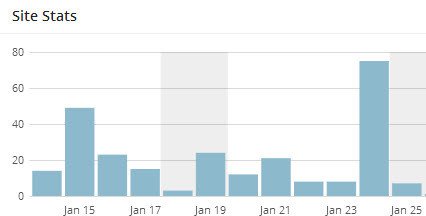 A couple of people have messaged me to ask why I have not posted an update on my progress (or the lack of it!) for a while well it is quite simply down to the weather, if I don’t fly I tend not to blog. I did go to the fly club this weekend and the two instructors Mike and Katie were there, but no one else. The parking area for the aeroplanes looked like a small lake maybe we should fit floats to the C42s, now there’s an idea!!!

I went over as I was due to fly so I had nothing else planned and during the week I had bought myself a David Clark H20-10X headset from a well known online auction house. They were advertised as being in good condition and working, however when I got them they had two issues, the mic boom would not stay in place and the LED light that flashes to say the battery pack is supplying power was not flashing. I emailed the seller who assured me they were working when he last used them and that he had sold them with good intent, going by his tone I believed him and decided to keep them and ask my instructor to take a look at them, before sending them back to the sell if they still didn’t work.

Not everyone seems to know this, but if you use “buy it now” as opposed to bidding, even on a second hand item you are covered by the distant trading laws, no matter what the seller may say or put in their listing, they cannot be more restrictive than the rights you have in law. I’m not sure what the case is if you are buy from an overseas seller, but that was not the case for me anyway.

After having a little play with them I found the LED would come on if I put pressure on the connection to the battery pack and the mic stayed in place if I push the plastic sleeve back into the hole where it exits the head set.

Mike is very thorough in everything he does or so he seems; I guess that’s a good trait for a flying instructor, he tested them out tighten the battery connection and found one of the cable strain reliefs needed replacing so fitted a new heat shrink to it. I now have a working headset which I can’t wait to try out in the air, hopefully next week UK weather permitting

I’m thinking maybe I should write some reviews and then just maybe I would get some free samples!!!