Light Wind and a cloud base of over 3,000ft today so all looked good for another lesson on Practice Forced Landings, as I drive down the single track road and just before I turn on to the dirt track that leads down to Chatteris Airfield I see a guy with a parachute walking towards the track, well this is new, I thought to myself, I stopped and gave him a lift back to the club, he had been trying out or learning with a new winged suit and got a bit off target!

As I walked to the clubhouse I saw a new aeroplane parked up, it had a long wingspan and turned out to be a Chevvron 2-32C 3 axis Microlight in for a check flight with Mike. 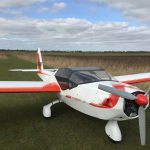 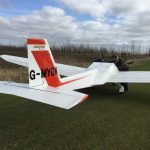 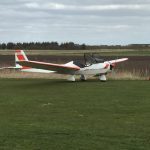 Mike asked if I would mind him slotting in the check flight before my lesson, I had no problem with this as it gave me time for lunch and a cup of tea! As I stood drinking my tea Stuart came in and asked if I was flying in our C42, I explained I was waiting for Mike and he kindly offered to take me up while I waited.  While we were flying I had a go flying it from the other side, wow I could not believe how much more difficult it was flying left handed. Straight and level was not too bad but 30 degree turns, well that’s another story!

Just as Mike was about to turn onto final the Parachute plane called Clear Drop and we all left the circuit as is the agreement. 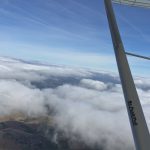 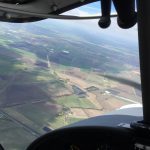 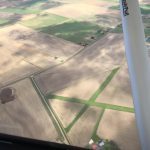 The time all canopies where down, the check flight paper work done and Stuart and I were on the ground my slot was over. However Simon was up next and didn’t mind waiting, so Mike and I went up for some PFLs, it was to be only 30mins, but again the time we got back it was nearer 45mins…

This time I was using constant aspect to fly down to a mark where I estimated I would need to be at 700ft to glide into the field. This combination seemed to be working well for me, let’s hope it continues!

Just before I left we had another visitor to the club in a recently recovered Skyranger, pictures below. 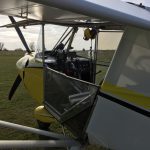 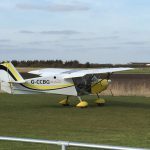