Well not long back from another lesson (24 November 2013), and a little disappointed in my performance today, Mike said I was improving it was just that he had increased the ante a little, I’m not so sure!

So this is how it played out; on arriving at the airfield around 30 mins before my lesson I see the training C42 just going up and I notice the windsock and remember thinking the weather seems calmer than forecast. I parked up and walk over to the clubhouse, as I pass the hanger I see Mike showing a new person around one of the Microlights, he explains that they are running a bit late due to the weather. On into the clubhouse and I make a cup of tea for myself and a couple of the others. Stuart (another student who is further in his training then I), Mick and Pat (both own C42s and have their licence) are discussing the runways at Boston airfield as Stuart had just returned from a cross country to there. I produced a packet of Jaffa cakes and offer them around, after we all had some, someone commented “it’s a good job Katie is flying else there would be none left!” I can’t remember who made the comment, or maybe I can, but don’t want to drop them in it! 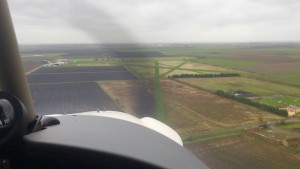 My turn to go up comes, I go out and pre-flight the aeroplane and it starts to drizzle, I know its drizzle as I have been reading up for the met exam and now know the definition! Luckily it stops and we can go up. I’m thinking we will be using the nice big and wide runway 01 perfect for me to practice my landings on especially with the cross wind and all, but no Mike has other plans, we would be using runway 03 which is a lot narrower and therefore more challenging to a student pilot!

We taxi out and go up, runway 03 has some trees a little beyond the end of it, so you start by racing toward these and then up you go and soar high above them. Around the circuit we fly, downwind checks done and downwind call done, turn on to base leg and we fly at 90 degrees to the runway, but pointing a little to the left to allow for the drift caused by the wind, power off, flaps down one notch and turn on to final, not to bad a landing a little heavy because yet again I don’t pull back enough on the stick, it’s like my brain is saying I know what you want to do, but then ignores me and instead just wants to get the aeroplane on to the ground and thus I stop bringing the stick back.

This time all is looking good and the landing is a lot lighter, have I finally cracked it? Power on and around we go again. Mike says this is the last circuit of the day as the light is going and I’m out of time, my reply is “ok I had better make it a good one then”, however Mike throws a curved ball and says ok, but this time we are going to be landing with full flaps and tells me what to expect and to keep some power on to counter the extra drag from the flaps. In I come, approach looks good flaps from stage one to two, power on a little, nose down, all at once and watch the speed, with full flaps we are looking for 55 knots and not the normal 60 knots. Down we come and once more I fail to get the stick fully back before touch down resulting in yet another heavy landing, not a good way to finish the day I think to myself. We taxi back and Mike debriefs me and says I did well! I had not felt that I had, but as he said the conditions were more difficult and he had us using a narrower runway, he says my approaches were more consistent too. I take some consolation from this, but I still feel disappointed in my performance.

Back in the clubhouse Katie had made Mike and I a cup of tea, which was very nice of her, we discussed how I did and she said she had noticed a few heavy landings. I asked about my next exam which is meteorology, it had been on my mind as I had read the relevant section in the Cosgrove book and still had no idea what to expect. Katie kindly asked me a few questions and explained some of the items to me which hopefully will allow it to make more sense on the next read through.

And so ends another lesson, but with me feeling not as upbeat as normal.

Next week I’m at the Flying Show NEC 2013  with a friend and fellow student Simon, I intend to take a few photos and write a review of the show or at least some of the things at the show.