I got up this Sunday morning and planned my route to Boston and back as I had done the week before. I sketched out the triangles of velocities for the wind at 2,000ft and filled out my Plog (Pilot Log) I then checked that the numbers are correct by recreating the route in Skydemon , I never seem to agree 100% with the numbers, but I assume that is due to errors in physically drawing and reading the numbers, however they are normally very close and that was the case today as well.

I arrived at Chatteris, went into the hanger and pre-flight checked our C42 and then pulled her out ready for the flight. The wind was yet again gusting to around 15 knots and this was forecast to get worse as the day went on. At Chatteris we a lucky to have  quite a few runways to choose from which allows us to keep the cross wind element down, as the C42 is only demonstrated to 15 knots crosswind.

Mike asked if I had the route planned and then gave my figures a quick sanity check, he then asked how I intended to leave to fly to Boston. Well as we were going to be on runway 19, I said I would fly the circuit climbing all the time and leave at the end of the downwind leg, flying towards a known point where my route intersects and then change onto my heading. This meet with Mike’s approval, so on to the next question, how would we join at Boston, well the great thing about writing this blog is it helps me commit things to memory and for last week’s blog I drew out the overhead join from the south for runway 27 at Boston, so I got this correct too! The only thing Mike added was as Boston’s runway 27 is a right circuit, we should fly a little wider over the runway so I can see the runway better from the pilot’s seat.

So off we went, runway 19 following Pat and before Katie and Julie landed. Around the circuit and out towards Wimblington levelling out at 2,300ft, at Wimblington we set course of 340°. At the halfway mark I should see Fenland Airfield to my left, however I was looking and looking and could not see it! Mike suggested I look out of the other side and sure enough there it was just to my right!

A little further on I checked my location again, I should have been between Whaplode and Holbeach, but I was to the left of Whaplode so I decided to correct my course and turn and once back over my track then turn again back on to my heading.

Just before the 5 miles remaining mark there is a bridge across the river Welland it is bang on my plotted course and I was directly over it. At this point I descended and switched the radio to Boston Traffic (135.47) and down to 2,000ft I made my 5 mile call. I could see where I thought the airfield was and we were heading directly to it.

We flew to the left of the runway and made the overhead join, turned and descended on the dead side and then turned again on to the downwind leg. Mike pointed out some visual markers. On Final things were fun as there was a cross wind at almost 90° and approaching the 15 knot limit. However apart from floating a little longer then I thought the landing was a good one and we parked up and had a cup of tea!

I lost Mike as he disappeared as I was booking in, I found him in the hanger chatting to Chris who was working on restoring a Morris Marina pickup

After some time we decided to leave, as we were walking to the Aeroplane I asked Mike if he had ever seen inside the Flight Sim building, needless to say he had and also knows the guy (Ian) who owns it, he took me in and introduced me, they were just about to run it up and invited me to take the controls, it was amazing, the graphics on the wrapper around screen, every control works in the 737-800 cockpit and there is even a link to the training ATC where you can speak to them and request all the normal services!  Check out their web site at http://flightdeck-reality.co.uk/ 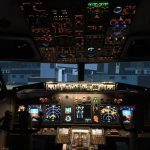 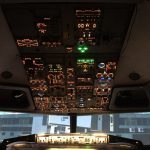 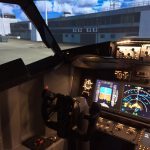 Back to reality and my flight back, the crosswind was getting even higher so we lined up diagonally to reduce the cross wing element probably by around 10°, Mike briefed me on what to do, hold the stick into wind power up and as we approach flying speed progressively bring the stick back to neutral. I did as mike said and we were very soon airborne, we flew the circuit and left to the south crossing the bridge, Mike suggest we add another 10° to keep on track and this worked out well, we hit all the marks correctly. Back at Chatteris the landing went well too. It was however too late and too windy for me to make a solo flight back to Boston, however Mike was pleased with my flying and said weather permitting I can fly solo to Boston next week. 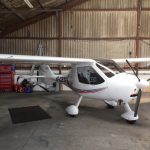 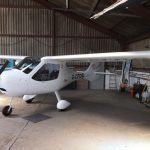 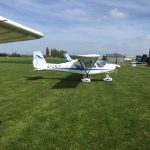 As an aside I upgraded Mike’s Garmin Glo to 2.7 and he successfully tested it during the next lesson, so I would recommend anyone with the Bluetooth issue on iOS 8.3 to do the same!