I have dipped in and out of the PilotAware project for over a year, but as the weather was good and I was not flying alone last weekend I decides it would be good to try it out.

So first off what is PilotAware? Well for a full description I would suggest you head on over to their web site http://www.pilotaware.com where they will summarise it as:

“PilotAware is a low cost portable traffic awareness unit for use in all types of aircraft that shows where aircraft are in relation to you. PilotAware integrates with existing popular navigational equipment such as Sky Demon, Easy VFR, Runway HD, both Android and iOS, and is also compatible with other fixed navigation equipment such as Dynon equipment. Also includes audio alerts.”

All of which seems to be true! It is based on the popular Raspberry Pi 2 B and uses an uBox USB GPS, A DTV dongle, USB WIFI and a PilotAware bridge board for the reception and broadcast of their own system, which is supplemented by the reception of ADS-B via the DTV dongle, clever and cheap (comparatively speaking).

So why have I left it so long before flying with it? Well a number of factors, first it originally used an off the shelf transmitter, but they found this was underperforming and the all new board was only released earlier this year. Next and still a concern for me is the uBox GPS, it is very slow to get its first 3D fix and thus rightly or wrongly I’m concerned on what will happen if it loses its fix in flight and how accurate it is. I think I will raise my concerns at the 2016 Flying Show with the PilotAware team in December as they are showing the system there. Also I don’t like the exposed wires and USB dongles, I would prefer them all to be encased; lastly I have only recently purchased a 16Ah USB battery to power it in flight, the plan was originally to use our aircraft’s 12v socket, however no plugs seem to reliably stay in it, a problem with our aircraft not PilotAware. 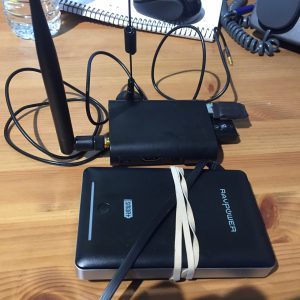 So onto the flight!

Tom and I got to the airfield in time for our flight and we waited for the person before us to return to the airfield. While waiting I switched my PilotAware unit on as the GPS I have is not the fastest in the world to get a fix! I left it on in the car for around 45mins and had previously ground tested the PilotAware driving for around 1 hour, the flying time today was 2hrs 15mins and I left it on while on the ground for around 1 hour at Cromer. So a grand total of 4hrs 15 mins and the battery pack was still over half charge remaining! I’m using the RavPower iSmart 16.75 Ah battery which can be seen on Amazon  here

I use SkyDemon for my navigation and connecting the PilotAware is very easy, once setup. Simply select Fly and now you have a choice “Use Location Services” or “Use FLARM”, Pilot aware uses the FLARM protocol to pass location and traffic information to SkyDemon. If the system were to fail you can simply stop the Navigation and restart it using Location services or get the map out!

The first thing to say is the GPS did not drop its fix at any point and seemed to be very accurate. We flew to Cromer for the first leg and stopped there for lunch, where we met by chance some of the guys from Boston airfield.

Another feature of PilotAware is that it has an inbuilt track logger and the below image was up loaded from this test flight. SkyDemon also saves your tracks and they can also be exported into a map the same way. 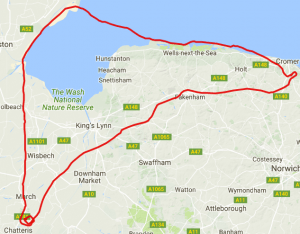 I currently have the system set to 30,000ft separation, just for testing, on the flight back we saw on screen and in the sky a number of commercial aircraft way above us. Which we thought was pretty cool!

On our final leg back we had a RV8 cross us 7 miles out, we did not make visual contact, but it was on the display and we could see he was climbing out. 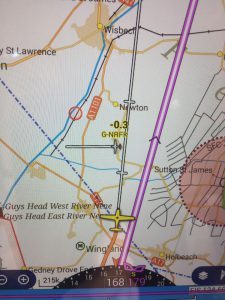 I think this unit has proved itself and adds even more benefit to flying with SkyDemon, even if just for a local flight.

My next task is to build it into a single all inside case, that I have ordered from eBay.

For those that prefer to fly with a paper map the unit also has an audio out for announcement of aircraft e.g. “Traffic, One O’clock, level, ten, kilometers” will be announced.

Many light and Microlight aircraft don’t have a GPS connected to there transponder, if this were to hardwired into the aircraft it has a GPS out option that can now be connected to a compatible transponder. See this report on the NATS web site http://www.nats.aero/news/successful-gps-trial

Overall I was very impressed, anything that helps you see other aircraft early has got to be a good back to your lookout and a safety improvement, I for one hope more people use PilotAware or at the very least connect a GPS to their transponder.