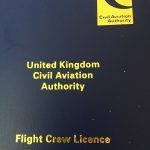 dropped through my letter box. In eager anticipation I ripped the envelope open, there was a nice looking blue book, which I assumed would be like a passport, I opened it and it was just a plastic wallet, I don’t know what I was expecting, but the black and white piece of paper that purport to be my licence was not it! oh well the main thing is I can now fly and as it has been less than 30 days, so I can fly without needing a check flight too. The 30 day rule is not a legal requirement is just written in to our aeroplane’s syndicate rules.

I arrived at the Chatteris airfield and could not believe on such a fine day there were not more people flying, what a waste of a great day, I thought to myself, I was also quite pleased as it was not busy for my fist fight. It’s a very odd almost unnerving feeling, not needing to ask if it was OK to fly and OK to fly to wherever! I checked the aeroplane out and got her out of the hanger. I went back in to the clubhouse and said I’m off and where I was planning to go and off I went!

I climbed up to 3,000ft and I had my trusty Skydemon and Garmin Glo setup with the route and I had loaded it on to my iPhone too as a backup. After about 10mins Skydemon reported loss of GPS signal, WHAT NO, I thought, lucky I loaded it on my iPhone too!  I knew where I was going so it was not a big problem, however it was a little upsetting, I switched off the Bluetooth on my phone and the iPad reconnected to the Glo and started to work, the problem did not reoccur! The Glo should be able to handle 10 concurrent connections, so I don’t know what went wrong, I will look into this later…

The trip was up to the Wash and then along the coast to Hunstanton around Hunstanton and back over Grimston on to south King’s Lynn and back to Chatteris this took 80mins from taxing to parking up on my return. The landing was good it floated long then normal, possibly due to the cross wind, but alas no one saw it, funny how everyone sees a bad landing but no one sees a good one!

To sum up, it’s an incredible feeling of freedom and responsibility to decide, plan and fly your own route without needing anyone to endorse it!

I’m planning on another couple of solos and then maybe take some friends up with me!

Some pictures from my flight are below:

10 Replies to “First flight as a qualified pilot!”