Simon and I set of for our lessons together today, after leaving my house in the pouring rain we thought it wise to call ahead to check if the lesson was still going ahead, there had also been a problem with the aeroplane and we wanted to  check that this was not going to impact our lessons also.

We were quite surprised to hear the weather was so different at Chatteris, which is only around 38 miles away by road, apparently it was a nice day to go flying apart from the gusty wind, but this seems to be the normal at the moment!

When we arrived the aeroplane was ok to fly, but was awaiting the cowlings to be refitted, which delayed the lesson by a while.

This is what I took away from the lesson, on forced landings, WARNING it may not be complete or in the correct sequence, I hope it is, but just in case you have been warned, these are my notes from memory! 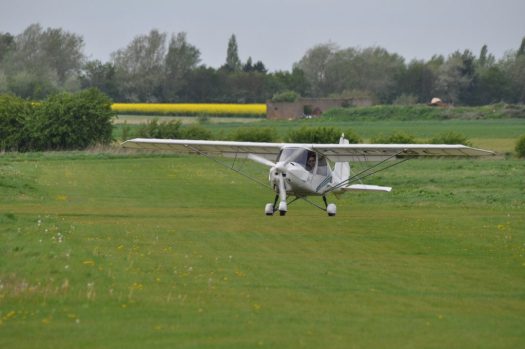 Putting all of the above in to practice sounds simple, but it’s not, so today we simplified it by missing out the mayday call. The first time we stayed with power and Mike asked where I would land, it seemed to take me forever to select somewhere and it was too far away! The next time Mike closed the throttle and I had to find a location, identify the base and final legs as well as pick out the 700ft point on the base leg, things went ok and we made the approached and would have landed in the field selected. The next one was no so good, I select a field to far away, miss read the altimeter thinking I was at 1,500ft when Mike and my eyes were telling me I was at 500ft! we powered on and climbed to 700ft and flew to the 700ft mark and then continued the exercise. My last two were ok although one of them required me short cutting the base leg to make it, but make it we did. As we were flying back to Chatteris Mike closed the throttle (we don’t kill the engine for safety reasons) and said ok put us down on runway 19 from here, so I selected my 700ft point and flew to it, I was a little high so I extended the base leg and then turned on final aiming for the middle of 19, as we were nearly over and high I deployed two stages of flaps and was holding off drift too, all was going well, too well, and then just above the runway I put in the wrong rudder direction which Mike and I both instantly realised and I corrected before touch down.

This lesson left me almost as exhausted as my first solo, it takes so much out of you, one day I hope it will all be second nature as it is to Mike, Katie and the others! Until now I had not realised how exhausting learning to fly could be, but it’s still good fun too!