Flying is never cheap, but learning to fly in a microlight is good value and less expensive than learning to fly in other aircraft types. I’m fly a lot at the moment because my GST is coming up soon and I want to give myself the best possible chance of passing it!

It had been pointed out that my solo navigation hours were 30mins short of the minimum of 3 hours required. This did not mean I needed to do a third out landing, just that I needed to plan a route and fly it, so this what I did on Friday evening.

I planned a route that took me up to Bawsey Lakes/pits (nr King’s Lynn) and then I turned towards the Gt Ouse taking me just to the north of King’s Lynn, before taking a direct line back to Chatteris airfield where I would fly to the East and join downwind, well that was what I had planned!

I arrived a little later then I had hoped and spent a little while going over my planned route with Mike, who had kindly agreed to stay on to allow me to fly the navigation I needed. The weather was not great with a heavy haze and rain forecasted for later in the evening.
I set off and set route, it was about the halfway pointed I noticed I was off track to the left (yet again, it always to the left for me!), I turned right and made a track correction turning back on to my heading once I was where I should have been! I carried on over the A10 and West Winch and up to the Lakes. I turned onto my new heading 315° for 5 miles and flew to the north of King’s Lynn. At the Gt Ouse I turned onto 200° and decided to decent to 1,700 in the hope it would improve visibility, it didn’t really help much, After 10 mins I could see Wisbech of to my right, just where it should be. After another 5 mins I had hoped to see Chatteris, but I could not! Shortly after I spotter March and then Chatteris airfield on my nose, so I turned to the east and joined downwind and landed back OK. After a short debrief Mike had to go, so I washed our aeroplane and put it away using my newly acquired hanger keys to lock up.

Sunday and yet more poor weather, but it didn’t stop my mock GST going ahead, I had thought it would have done, but we found some clearer skies over Huntington.

Sat in the C42 with Mike I ran through my normal checks and Mike suggested some different wording and different way of doing the control check. The Control check was to do my normal “full and free movement” check on the stick, but then separately do the “in correct sense” test to avoid any possible ambiguity. I was about to set off when Mike asked so what are you going to do? I said take-off from runway 01 and climb out of the circuit to the East, Why? Said Mike, so I can do the GST. Mike said, if the examiner has not told you what you are to do after take-off ask him before you move off! So I did and was told to take-off climb to 3,000ft and maintain straight and level flight. I levelled off at 2,500ft and Mike asked why, to avoid going into cloud was my reply which met with Mike’s approval. Next I was instructed to make a normal turn to the left by 60° and trim for 80kt and then 60kt all was ok, back to 70kt and a high rate turn in a direction of my choosing, this went ok, even hitting my own wake turbulence! We flew on to some clearer skies. Next Mike put the aeroplane into a spiral Dive and asked me to recover which I did without issue and then it was an unusually high attitude and again I recovered OK. Next I was asked to stall the aeroplane and perform a powered recovery. I performed a HASELL check and determined that the location was not suitable, I changed our heading away from the built up area and then stalled it and recovered. Again this was OK although a little less nose down was suggested! On to a glide descent and stall with pitch only recovery, A quick HELL check, all OK so into the stall and recover. All OK so far, straight and level at 2,000ft 70kt and let me know when you are happy, said Mike. Back up at 2,000ft, 70kt I said OK and Mike Immediately closed the throttle and declared an engine failure. Trim for 60kt, assess the wind direction, select a field, wait my luck was in there was a farm strip in range! I selected it. Restart checks, simulated restart failed (one day it will work!!!) check my approach to the strip, change radio to London Centre, call Mayday. Turn on to final, Stage of flap, I was about to put a second stage in and do the committal checks when Mike said very good go around. Now for the words I hate! Fly me back to Chatteris. I didn’t have a clue where we were, I took out the map and found the A14 which we were parallel with (well i hoped it was the A14!) so I decided to turn to the North and then spotted a river which should be the Gt Ouse and the start or end of the drains! Then I spotted an airfield which by the map was Sutton Meadows. Just after Sutton Meadows I turned to where Chatteris should be and after a few minutes I could see the airfield and descended and joined on base Leg for 01 the landing was good too!

Mike said well done if I fly like that on the day I will pass!

I then went back out for 30mins solo and practiced trimming and I flew a few circuits too before it started to rain, so I landed and taxied back.

In the clubhouse once more I asked for some example questions and was asked to explain the fuel system used and the location of its parts! I guessed, wrongly! And the same went for the control linkages. My homework was set, i need to read and learn the pilot’s handbook for the C42 before next week!

I also need to learn these values! 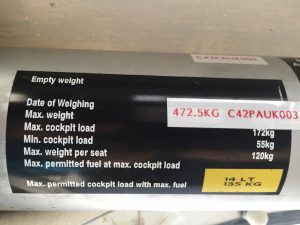 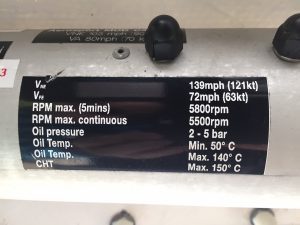 Lastly and by no means least a huge congratulations to Callum who successfully completed his first solo flight Sunday.