“When everything seems to be going against you, remember that the airplane takes off against the wind, not with it.” – Henry Ford

A nice quote from Henry Ford and quite apt after my previous blog post here, but alas when the wind blows hard microlight pilots can but sit and drink tea!

Another disappointing day today due to a different reason; Mike let us know that there would be no flying due to the strong and gusting wind, I really wanted to fly in the hope of putting last week’s trials well and truly into the past.

I decided to go to the club anyway for a cup of tea and a chat. On arrival I saw my instructor Mike outside cutting drainage channels into the concrete slab, I asked if there was anything I could do to help, but my timing was impeccable as Mike had just finished so I went into the clubhouse and made the tea. In the clubhouse were Katie and Pat, passing the time of day with their usual banter, but welcomed the offer of a cup of tea.

I went and took some pictures of some of the Microlights which I have uploaded to the photos page on this site here. Talking about the site there has been quite an upturn on the page hits over the last week with a new daily high of 105 and a number of days above 70 hits per day. This seems to be traffic coming from Twitter, a post on the Microlight forum asking for people to upload pictures and from Google with people searching for “air law notes”, I hope that it will continue, but time will tell.

Shortly after I had made the tea Mick and Julie arrived and they were soon followed by Alan who was carrying a food parcel of savouries and cake, always a welcome site! We all sat around passing the time of day and optimistically hoping the wind would die down so we could fly, however it did not happen.

The collision avoidance strobe light on our aeroplane had been removed as it had stopped working a few weeks earlier, I asked if I could take it home to see if I could find what was wrong with it and I also like seeing how thinks work. It’s a Skyflash 2000 self-contained strobe only requiring 12V dc and no external driver unit; it is a sealed unit with no obvious way of taking it apart that could be successfully reversed if it could be repair.

After careful examination and noting another’s attempt to open it I came to the conclusion the aluminium ring must be holding an upper and lower plastic moulding with the circuitry sandwiched between them, but try as I might the aluminium ring would not turn or move in any direction. As the unit was scrap anyway I decided to take a craft cutting disc to the band, as I carefully cut throughout the band it suddenly sprung open a little, working my way around the band I managed to separate it from the plastic body to reveal the construction I had assumed they used. It looks as if the band, upper and lower parts had a silicon type bonding agent keeping all of them together.

Now it was open it was obvious where the problem was, the storage capacitor had blown its top and leaked its electrolyte out for good measure.

Warning: Xenon strobes use high voltage for striking the flash tube it may only be 12V dc in, but its hundreds of volts across the tube. 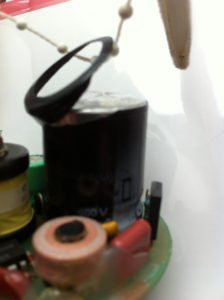 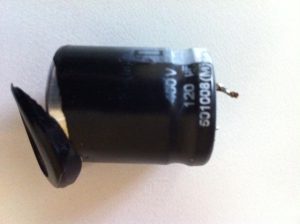 I have ordered a new capacitor which cost a little over £5 and we will see if that is the only thing that is wrong with the flash unit once it arrives. If so the next challenge will be to find a tube with an internal diameter of 55mm and 27 mm in length to hold it all together!