Last week I did fly also, but due to working away I didn’t have chance to write a blog about it; it consisted of a brief check flight with Mike and then Solo, it was quite gusty last week as it was this week too with the added complication of localised rain showers, which I was advised to fly around where possible. Luckily the only shower which made me alter what I was going to do was as I was flying back to the airfield. I had planned to fly down the drain and turn towards the airfield joining on the downwind leg, but downwind was where the rain was, so I turned early and joined on base leg instead, I missing most of the rain and landed safely.

So back to today; I had my camera with me and wanted to try and shoot some video, I had tried this before, but it came out over exposed and out of focus. The over exposure was easy to fix, I use the camera in manual mode so as to “disk” the prop and last week had it set way to slow at 1/40th this week I upped the shutter to 1/160th and the prop was still disked, I also changed the focus to manual and set it to infinity, but I guess this is not going to work out to well as it was still blurred, I’m not sure if this is due to the mount vibrating, shooting through the propeller or the settings used ,you can see what I mean on some of the video on this page, the parts shot from the cockpit. 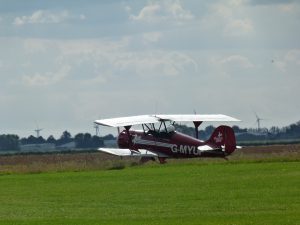 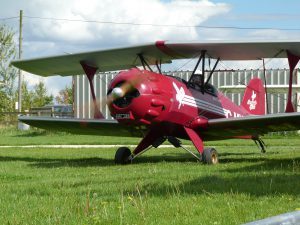 Luckily the club has Alan, who knows more about these things and has the professional kit to go along with it and will be taking some high quality video which I hope to share with you.

I taxied out to runway 01 and took off, the crosswind was not too bad at that moment, I applied full power and off I went, it is quite amazing how much the climb rate increases with just one person in the plane. I remembered feeling quite isolated the first time solo, when you look over at an empty seat where the instructor once sat; there is no one to reassure you or correct you! I turned on to crosswind and left the circuit to the east out to the drains, I followed these until south of Chatteris and turned to cross the outskirts of the town and set my heading to Whittlesea. The day was a little hazy and I could not see Whittlesea, the doubt started to creep in, what if I was going in the wrong direction, would I ever find my way back! I got the map out to reassure myself and soon after spotted Whittlesea. Once there I checked the map , I saw that if I fly east I would see March and after some more doubt I recognised the prison and rail yard which confirmed it was indeed March, looking once again at the map I thought about following the railway line out of March and back to the drains, but shortly after I started following it some radio chatter from the parachute control referred to some traffic they were keeping an eye on, this traffic had to be me, so I decided to fly more east towards the drains. I was also aware that if I went too far north I could end up in RAF Marham’s air space which would not be a good thing.

Back at the drains I few up and down a few times and practised a few emergency landings ensuring I stayed above 600ft the first 2 I would not have made my selected field, I would have been short, the third one I would have made it down in the field, but the smoke in the distance confirmed I was not into wind, the next one seemed to go OK and on my last attempt I was too high, I guess if it was a real emergency landing at that point I could have side slipped, but I was not about to try that on my own and while practising, maybe I should have!

Time was getting on so flew back to the airfield and saw canopies in the air and the parachute plane landing, I held out to the east, I thought I heard the “all canopies down” call so I turned towards the airfield and called “3 miles out inbound, confirm all canopies down” and I got the confirmation I wanted. The landing was quite tricky as the cross wind had picked up, as I approached the landing I was still sidewards to hold off the crosswind, I flipped the plane around on the rudder to point down the runway, remembering the warnings that it was very important to be pointing in the correct direction, however with all this going on I failed to hold off as long as I would have liked. The landing didn’t seem to bad, I have made worse with Mike by my side while practising circuits, so given the conditions I was quite pleased! Back in the clubhouse, Katie asked how it had gone, I said it was OK, but the landing was tricky and she said yes it did sound as if it was a bit heavy. I have never noticed the sound of a landing so either my hearing is not great, Katie’s is very good or I’m the only one to make such “noisy” landing, I will be listening to the others landing to see which it is!