I have never been great with exams or even mock exams come to that and today was to be a full mock GST (General Skills Test) so in the briefing Mike told me he wanted me to select a runway, takeoff and climb out to 3,000ft to the south west, he would then give me instruction on what he would like me to do and I would carry them out.

Today while I warmed up the aeroplane I asked a question which I have always had, but equally always forgot to ask, the question I asked Mike was how long would the engine run for if the fuel tap was off, would we get as far as taking off? Mike is very practical and so his answer was, let’s turn it off and see! I turned the tap off while the engine was running and we commenced the pre-flight checks. The engine stopped about 1min 30 seconds later just after the power check. To restart with empty carburettor chambers we switch the electric fuel pump on for about 20 seconds and then re commenced the start procedures and the Rotax engine started first time. 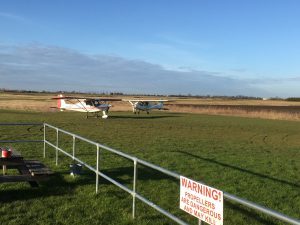 So back to the mock GST, I selected runway 24, made the radio calls and taxied out, Julie and Katie were in the circuit and had called downwind about the time we got to the runway, so I knew we had time to line up and take off.
Up we went climbing at 60kts, 300ft flaps up, 500ft fuel pump off, 2,000ft I lowered the nose to check for traffic, back into the climb and levelled out at 3,000ft. I was a little off heading, I must keep an eye on a reference point! Trim for 70kts straight and level, said Mike, OK that was not a problem, turn 90 degrees to the right and trim for 80kts straight and level, it took me a while, but I got there, for some reason it needed more revs than normal! Next trim for 60Kts, OK I faffed around, but got there, Mike said I need to be quicker and showed how I should have done it. Next Trim for 70kts and turn 180 degrees, now show me a steep turn to the left, I did so letting the nose drop a little, but within acceptable limits, now to the right, that went better. Next I want you to keep your hand on the stick and throttle and I will put the aeroplane into unusual attitudes and when I tell you to, recover, said Mike. First the nose dipped and then he pulled it up in to a very steep climb and said recover. I put on full power lower the nose and level out, good. Next one, this time Mike put it into a spiral dive, power off, level the wings and ease out ,  once the nose is above the horizon and speed is back in the normal range I added power and returned to a normal climb, good. Now turn 90 degrees to the left, next I want you to stall the aeroplane and execute a recovery with power. As I went to stall the aeroplane Mike called out “Failed“, you failed right there! Why I asked, no HASELL check (shit I thought)!
HASELL stands for :
• Height
• Airframe (are the flaps deployed)
• Security (Harness and hatches)
• Engine (T&Ps)
• Location
• Lookout
OK this time I carried out a HASELL, Height 3,000ft, check; Airframe, flaps up and all looks ok, check; Security, Harness and hatches secure, check; Engine T&Ps ok, check; Location, clear of any built up areas and airfields, check; lookout, here I did a clearing turn to the right (Mike said to ask the examiner to look too!) and another to the Left and then turned back on to heading, I stalled the aeroplane and recovered. OK, show me a stall and recovery in a turn; this time I did a HELL check (Height, Engine, location and lookout), no need for a clearing turn as we will be turning anyway, Mike informed me, this went OK too. Next show me an attitude only recovery from a stall in a glide descent,  another HELL check and into a glide descent and stall, and recover back into the descent.

Next up, climb back up to 3,000ft and trim for 70kts. Up we went straight and level and Mike closed the throttle saying “Engine failure”! I trimmed for 60kts and selected a field ahead of us, it seemed to be the only one running in the correct direction! I then made a dummy Mayday call, and tried a dummy restart (wrong order, should have been the other way around!) I was too high, and I was saying so out loud, I said, I’m too high I might not make it, maybe I should put flaps on, or make some turns, what should I do; I decided to make the turns to lose height then I straightened up, flaps first stage, now second stage, yes I would have been down in the field OK! Power on and go around, said Mike, full power on, Mike closes the throttle “Engine failure”! I didn’t like the fields ahead as they were newly ploughed, turning 70 degrees to the right I said, I know its crosswind but it’s a better option than the other fields, ok power on and go around. With 2 stages of flaps it’s hard to keep the nose down with full power, 300ft flaps up a stage at a time, 500ft fuel pump off. OK climbing turn to the right level out at 1,000ft.
Right take me back to the airfield, said Mike, luckily the drains were in sight so I knew where I was. I made my approach checks, called Chatteris and joined base leg runway 24; my landing was good and I taxied back.

Mike debriefed me saying well if we ignore you not doing the HASELL check I think you would have scraped through. I need to be sharper on my trimming, holding my course and altitude and more positive on my engine failures, even if I think I’m not going to make it don’t say it outloud and take the actions don’t just say it!
Next week we will do the whole thing again and if I’m better than the GST is getting close! Oh how I hate tests!

Another good point from today is that Simon was last to fly and thus had the responsibility of washing G-GL and putting her to bed. Looks like you did a good job Simon!