As there was no flying last week due to the weather so today was going to be my first lesson with Katie.

I arrived at the airfield at around 09:45 for my lesson at 10:00 this had been brought forward from 12:00 as the slot was free and the weather forecast showed it getting more un-flyable as the day goes on , it was Katie who kindly text me to suggest this and if she had not I would not have flown.

On arriving I noticed our aircraft was out and down near the clubhouse, which I thought was a bit odd as I was expecting to get it out of the hanger and burp the engine as this was the first flight of the day. It transpired that Katie had kindly got it out and warmed it up read to fly for me.

I preflight checked the aeroplane and we got straight off using the main runway 19; the plan was to climb up to 2,500ft and use the constant aspect approach for the PFL, however almost as soon as we were up Katie closed the throttle without warning, I was not expecting this, but I put the nose down and selected a field ahead and we would have made a safe landing. We then climbed up to 2,500ft and tried it from up there, throttle closed, trim for 60kts, selecting a field much closed then I normally do using an imaginary line running in a semi-circle from the jury strut of one wing to the other, a quick check on the compass confirmed we were into wind so effectively we were on base leg already, I made a few turns and we came down and would have made it in to the field. One problem I always seem to have is watching the airspeed when climbing out with 2 stages of flap. Katie suggested to put the air intake bulge on or just above the horizon and the speed should be fine, I tried this the next time and it worked well; we also put the full drill in place for the second PFL and again I would have made it in and we were on base leg as before. The next one I was too high and would not have made it, here Katie suggest that side slipping would have be perfect, I have not done much side slipping and thus am not confident doing it close to the ground. We climbed up and Iined up on a river and I practiced a few side slips which went ok, apart from I had to apply too much thinking time before each manoeuvre, which would not be good on a real emergency landing, practice is needed here!  We then practice flying on power and attitude and Katie covered the ASI so only she could see it and I had to maintain speed in various turns, this was a good exercise and one I had not done before, it does force you to remember the relative horizon position and fly to it. The next PFL I found the field had power lines in it as we got lower, so I selected what appeared to be the only viable alternative to it, we would have got down, but probably ended in the ditch at the end of the field!

Our last PFL was overhead Chatteris, we can’t normally do this due to parachute activity, but the parachute school was grounded due to a technical difficulty, this time I was way too high even to side slip! We would have got down using the end part of the runway, however that is not in a good state currently so we powered up and went around. I landed normally with power, but then had brain fade, I don’t why but as we taxied back I totally forgot to clean up the aeroplane, leaving the flaps set, and the strobe and transponder on too!

Back in the clubhouse I was being made fun of for taxing with flaps on, until the next student inadvertently starting check out the wrong aeroplane! It’s a lot easier to do then you may thing when you are learning as you have your head full to overflowing with everything you must remember.

Today we had a choice of two cakes back in the clubhouse one nice Ginger cake (I’m not sure who made that one) and a very decadent chocolate cake made by Simon’s wife take a look at the picture below, but be warned even looking at it you will add  calories!!! 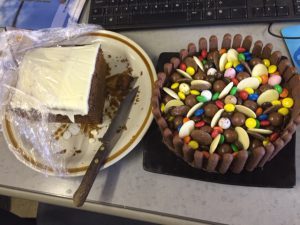 I found the lesson very helpful, getting a different aspect on PFL helped me see things I was missing before, but I’m still not there consistently. I need to hone side slipping as it will be a good tool to have, I need to try selecting a field where I need to fly a circuit to get into it with this method! Overall a very enjoyable lesson and I’m looking forward to my next one with Katie where we plan to build upon today’s.