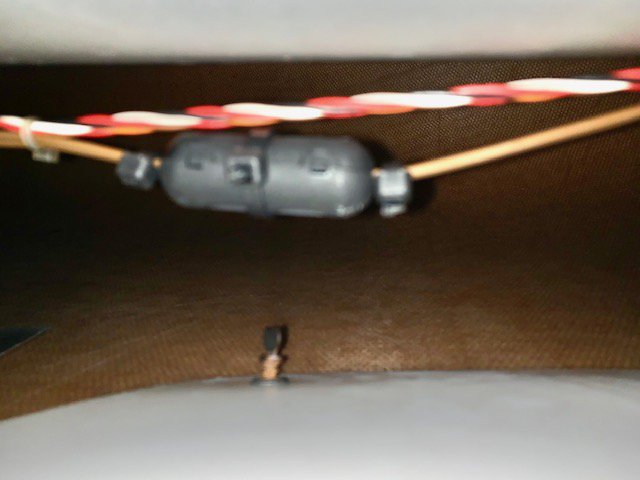 Recently our group fitted a Pilotaware with external antennas and at the same time we had the elevators and rudder re-skinned. Is the re-skinning unrelated, possible!

Sometime ago an LED strobe from Smooth aviation was fitted to replace the dead bottle flash and we had no noise from it. However, one of our group had reported intermittently hearing noise that seemed in sync with the strobe flashes. Smooth recommended cabling strobes is shielded Tefzel or similar. We fitted the LED strobe to the existing twin core flat cable (not shielded or twisted).

The aircraft also had an issue many C42A’s have,  in that when the PTT is pushed the trim indicator and the fuel gauge read erratically.

The buck converter used to power the Pilotaware was the second source of interference. This was the same type used for the GPS which had a low RFI (Radio Frequency Interference) footprint, however we are driving this one at around 50% of its capability and it was wiping out the intercom as soon as it was switched on.

So how did we go about isolating the source and fixing them?

First the strobe, the strobe noise was thought to be due to having moved the trim wire when we refitted the elevators and when we moved the strobe wire the noise would reduce and intermittently disappear. Thus, I deduced it was RF pick up issue and I moved the wire until we had continuous noise. Then I tried fitting a Ferrite choke at the strobe, this instantly cleared the noise, however the choke would not fit inside the vertical stabiliser. I tried fitting the choke in the fuselage between the last antenna and the tail, clamping it around the strobe cable, again instant silence on the intercom! To stop the choke moving I placed a cable tie either side and another around its body to act as a backup to the inbuilt clips.

Fitting this choke had the additional effect of removing the noise causing the trim indicator and fuel gauge being erratic while the PTT is pressed, the cable was acting as a pickup for any RFI

Eradicating the second source of interference

I then turned my attention to the Pilotaware buck converter, these are often noisy, but this one had proven to be OK in a low current operation, so I was not expecting this issue! Adding the choke was not expected to work on this noise source and it didn’t. I also tried creating a Faraday’s cage around it using tin foil, this worked to some degree, but was unreliable. Buck converters are notoriously noisy devices and the normally accepted way or silencing them is to fit an LC filter on the input (not the output) side. These are often fitted in radio control models to quieten down the ESCs (Electronic Speed Controller).

With this in mind I tried fitting a capacitor, the C of the LC filter, across the input of the buck converter and the noise was eradicated.

Noise suppression capacitors and ferrite chokes are two stand ways to remove or reduce interference, other approaches include, shielding the impacted instrument or the source of interference or using twisted pair cabling among others.

I hope the above helps others achieve a quiet radio in the aircraft, but if you are unsure about what you are doing, I would suggest contacting someone that understands interference suppression techniques to help!