While I would love the title of this week’s blog to be the reflection of a special offer at the flying club, it’s not. The title refers to the fact that I missed a week of the blog as a few people pointed out to me, so this week’s entry covers two weeks!

If however you are looking for a special offer AviationLogic are giving away some free, yes free, copies of its new app ApproBase to readers of my blog, to find out how to claim yours visit the review post here and read the comments they have posted, an offer not to be missed!

Two weeks ago we had our open weekend at Chatteris, I attended on the Sunday only, I could tell it was busy as I could not get parked down by the flying club, instead I cheekily parked in the parachute club’s car park! There were many new faces at the club and a few old ones too! A nearby gliding club, Peterborough and Spalding Gliding Club (P & SGC) attended with one of their gliders and all the Microlights were lined up outside and to top it all the sun was shining down. My wife and some friends had come over too, to watch the aeroplanes and parachutists. I also had a lesson booked which was a continuation of the previous weeks forced landings with a few circuits thrown in for good measure.

It was a most enjoyable day apart from one incident where on opening my Jerry can and petrol sprayed out all over me, luckily  and in accordance with safety procedures there was no naked lights around else I would have looked like the guy on the Pink Floyd album cover “Wish you were here” check out Google  if you are too young to know what I mean! 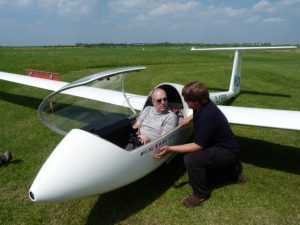 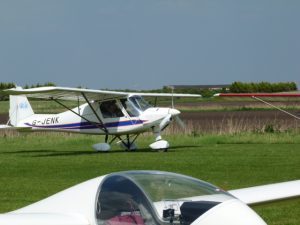 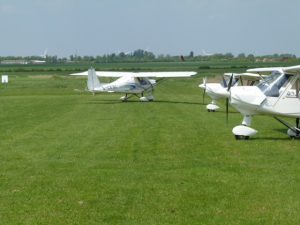 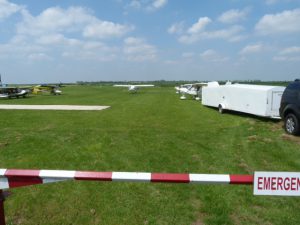 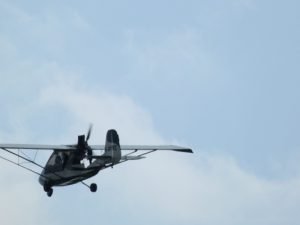 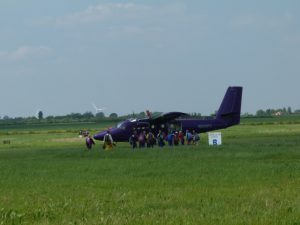 This weeks was an hour solo after a brief check flight.

The check flight was a circuit flown from the active runway 19, easily my favourite runway as it’s the widest and longest. I taxied out and flew the circuit which I know well and made what I thought was a good landing, certainly a very soft landing, then Mike congratulated me on flying a good circuit and an “Excellent” landing. I was very pleased by this and taxied back to the clubhouse to drop Mike off. I thought it would just be a case of going out and getting more experience of flying around the local area on my own, but no, today I was to fly three or four circuits on my own and then climb out to the east, level out at 2,300ft and trim for 70kts and ensure I maintain the exact height, then to do the same for 80Kts and 60Kts.

My first circuit we good, not as good as the one before, but I was happy, my second one not so great and I decided to power on and go around while I had two stages of flap on. It’s hard to keep the nose down with full power and two stages of flap and keep the speed in the white arc, but I did and around I went. This time I was determent to make it a good one else I was going to stay in the circuit until I did a good one. As I turned on to final I was little low, but no too low so I put some power on early and took it off as I rounded out and I touched down softly, flaps up, full power, off to the east I went feeling happy with my last circuit.

Next was to keep height while flying at different speeds, this not hard to do when Mike is sat next to you, but on your own you think you have it and then glance at the altimeter to find you have lost 200ft or gained it! Finally I was all trimmed for 70kts and holding 2,300ft so power on a bit keeping the nose down and watching for 80kts, this was harder to trim for but I got it after a few tries, right down to 60kts and trim, this I liked the most and stayed in that configuration as I flew into wind and towards Chatteris. I descended down to circuit height and called my base leg join, I really wanted this to be as good as my earlier circuit and all seemed to be going well, then I was low so power on a little and I continued to my touch down point,  all was going well. I rounded out and took the power off but it bounced not too badly, but still a bounce and then a second slight bounce possibly due to my speed and the uneven nature of the runway, but I was down. I’m not sure why I bounced the first time I think I may have rounded out to late or more likely  stopped bring the stick back. But all in all it was a good days flying which I really enjoyed. 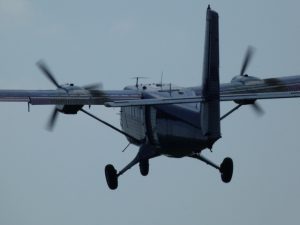 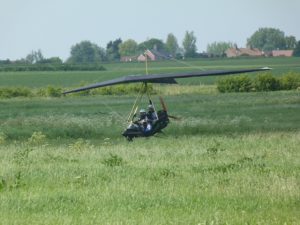 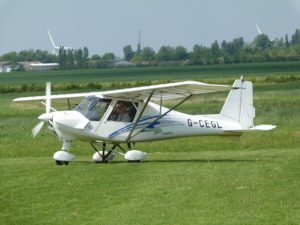