I had been wanting to fly an aircraft from the UK to another country for some time. Almost a year ago when chatting to Jason an AFI at Connington I met while doing my AFI (or FI(R) ) training I mentioned this to him. Jason had already done the trip once and thus he knew what to expect.

We planned to fly on the bank holiday Monday 27th August 2018, but the weather was not looking good,  the day before it had improved to be around the limits of the aircraft.  We decided to proceed and plan the trip in the hope it would in improve further and we would get to go. We met up with Paul who was going to follow us over with Tom in their C42, as they had never done the crossing either.

The first thing to do when thinking about doing a crossing is to order a life jacket. I went for the Crew Saver N180 form the Marine Superstore. I found it comfortable and not bulky; also the guy there was helpful when I called them and it arrived promptly. The main things to check when buying a life jacket is that it MUST be manually operated and the buoyancy is at least 150N.

We met up in a Costa coffee (other coffee shops are available!) to plan our route from Chatteris to Le Touquet.  We decided to route across and down to South End and then on to Dover and across the channel at its narrowest to minimise the risk. It can get congested in the skies over Dover, however,  as we were leaving early it should be ok. 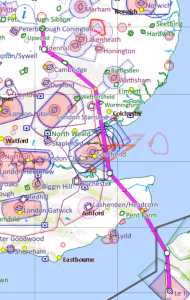 Next was the form filling this was so simple using SkyDemon. Simply buy some flight plan credits, I think this was £5 for five.

Do your route in SkyDemon and hit file plan, you need to add a few extra details and the flight plan is done for one leg, Reverse the route and resubmit for the return, flight plans filed, yes that’s it!

Next, the GAR wait, SkyDemon does that too, just go into the warnings and click on the spanner next to the warning re needing a GAR, complete the form and hit submit, I LOVE SkyDemon. Last bit of paperwork was to send a letter to Le Touquet customs, there are plenty of examples online. But basically, give them the reg, date, ETA, and the passport numbers of all people on board.

On the day the wind had dropped a knot or two and now was just under the limit so we decided to try the flight. If the cloud looked bad we would divert and stay in the UK. Nothing good ever comes from pressing a bad situation.

We set off at 07:50 with Jason on the radio and me at the controls, we climbed to 2,000 feet, this allowed us to call London Information and activate our flight plan. The call was as simple as “Call sign, London information, request basic service a flight plan activation” and then the normal pass your message and its response.

A little while later we were asked for our ETA for our arrival at South End airspace, this threw us a little but a quick look at SkyDemon’s Plog gave us the information we needed.

As we were getting nearer to South End’s airspace and thinking about changing frequency, we got a call from London Information advising us to change frequency and to call South End and that they would speak to us again once we have left South End’s airspace. We called and asked for a zone transit and this was granted and squawk allocated, back came the call to squawk the same code as we were already squawking! Apparently, it was still transmitting the last squawk, we recycled the transponder and all was ok. We flew straight through with a radar service, out the other side, they downgraded it to a basic service and they advised us to call London Information. This was all very simple!

As we approached Dover the cloud was driving us down from 3,000ft to around 2,000ft and the crossing was beginning to looking in doubt. However, as we cleared the coast it was brighter and we crossed at 2,500ft with good visibility. The French coast soon came into sight so we continued, at around halfway we called London information and requested a frequency change to Le Touquet which was approved. The call was made as we approached the boundary as marked on SkyDemon. 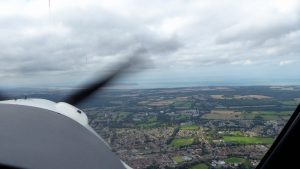 We routed down the coast and call Le Touquet, back came a pass your message with a heavy French accent! The normal response was given back and then we got "report passing November", passing November, it was only August! a quick look at the plates we had printed out to see if we could find visual reporting point (VRP) November didn’t yield anything, then we saw that SkyDemon have these on their map, which again made it very easy. 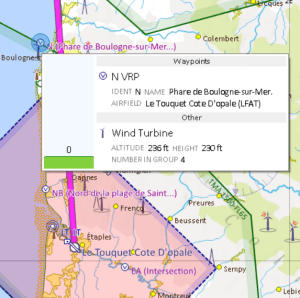 At November we called and was told to report November Bravo. NB was close to the downwind leg of runway 31 the runway in use. Using the SkyDemon approach helper, we entered the runway, direction and downwind join, this shows you the circuit, which again at an airfield you don’t know is very helpful.  I would and I did a quick sense check to ensure it seemed correct.

As we got to November it started to rain, 10% chance the weather report said, I’m not that luck normally! It continued to rain on the downwind leg, but bizarrely it stopped as we turned on to base leg.

The wind was now gusting 20kts, but only about 30 degrees off the runway. I decided to use a single stage of flap and we landed without issue, funny how nobody ever sees your good landings and doubly so in difficult conditions!

After clearing passport control we went to the reception and paid our landing fees and purchased 20lts of Avgas.

We walked into town and found a nice bar to eat, the place, in general, seems to be friendly and there are a few places even flying the Union Jack flag! A nice little town and I will go back at some point, next time as the radio operator!

The return was nearly without event the takeoff was with a crosswind and gusty too, it was very bumpy on the climb out.

The crossing was fine and the white cliffs of Dover welcomed us back home. While crossing South End’s zone we were controlled both by altitude and direction to allow for an incoming jet, this was the first time I have been given a heading and altitude to fly while crossing. A little while later came the call to resume self-navigation, unsure if this meant if we could now climb or not we asked and was told to remain not above 1,500ft and they would call us when we could climb, another jet passed by and then we were called and allowed to climb not above 4,500ft.

We were soon near Chatteris so we called for a frequency change and to close the flight plan, frequency change was approved but we were told the plan cannot be closed while we were in the air.

My landing at Chatteris was odd a little before the threshold I put a little power on as I was a bit low,  but just as I did the aircraft went up as if it had ballooned, I landed fine and said to Jason it was odd as I had not pulled back on the controls. Later we watched another C42 returning from somewhere and it did the exact same thing, then Paul said he had seen it happen to me so was ready for it but it caught him out too!

In summary a very enjoyable experience, but a very long day and very tiring too!

One Reply to “First channel crossing and visit to Le Touquet”