Today was looking good for my first proper navigation lesson; Mike had asked that I get to the club an hour beforehand to give him time to go over planning the route, allowing for wind etc. I dutifully arrived at the airfield an hour and 10 mins early. The weather was hot with a layer of broken could at around 8,000ft and no wind, the met office’s Low Spot Wind chart (214) showed variable at 5 knots.
On arrival things were not going quite as well at the club, the previous student (who will remain nameless) was late which had a knock on effect, his return was further delayed by the parachutist. I sat with Mike and we went through the planning of the route which was going to be Chatteris to Boston in a straight line, with no wind to allow for there was not much panning needed! I studied the map to establish the MSA (Minimum Safe Altitude) allowing for obstacles within 5 miles of the track and the highest I could find was 470ft, to establish the MSA we round this up to the nearest 500 and add 500, thus our MSA for this flight was 1,000ft. Our chosen altitude of 3,300ft saw us passing over Fenland airfield whose airspace extends up to 2,006ft so we were well clear of this, thus it was a direct route. On the flight log I noted down the radio frequencies for any station I might need on route Boston, Fenland, London Information, London Centre, Chatteris and Coningsby. Next I found the heading from the line on the map and added the magnetic variation to give the heading magnetic,  I measured the distance and worked out the time it would take us to fly it once we set course.
The previous student was now back and it was time to fly the route (well actually it was around 1 hour 45 minutes later then we had planned to set off!) we took off on runway 01 and set course to 350 degrees, we passed Fendland bang on the time estimate and all was going well. As we approached Boston Mike talked me through the radio calls need for “SAFETYCOM” which is how Boston operate, but also pointed out as it’s a shared frequency we should not make these calls until we were at 2,000ft or below. We descended down and made our first call to say we were 5 miles to the south and inbound, the next call was to say we were overhead. We turned once we were over Boston airfield and came back over the other end of the runway and called we were descending on the dead side, from there on the calls were as normal.

We landed OK and parked up, Mike introduced me to many people whose name I forget (if you are reading this, sorry!) We had a quick cup of tea and it was time to set off back to Chatteris. 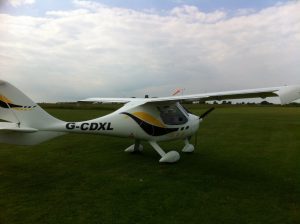 Going back proved a little more difficult for me! I think this was due to having the map in the opposite direction to travel, I tried turning the map around, but Mike said this was not good practice, also you can’t read the place names as easily upside down!
Flying back we should have been at Chatteris 26 mins after setting course, but I could not see it and it transpired while playing with the map I had been going off course and was to the east of March, I still could not see Chatteris, but by now I could see the drains and I turned and followed these back, a route I knew well!

My next issue was the landing; I powered back where I normally did and found myself very high over the airfield so we went around, thinking the issue was that I was too tight in I went a little wider on the next go and we did get down near to the runway, but still too high and much too far down the runway, on the next go I took the power off earlier (not really early enough) and we made it down, but the touch down was a lot longer down the runway then I would have liked. This was all due to there being no wind to slow us down, this is not a situation I’m accustomed to and had not allowed for it, I hope it’s a lesson learnt for the future!
Another issue I had, and would love you feedback on, is the choice of glasses, I have a good pair of varifocal glasses which are fine for normal reading. they are set-up more for computer work, however reading the small print on the map in flight and on the ground is very much a challenge. Having Googled it, it would seem bifocal are generally better for pilots, what do you think?

2 Replies to “Navigation and what does the map say!”