Saturday the 4th Jan 2014 the first flight of the New Year; Earlier in the day Mike had called to say the weather did not look promising at Chatteris, but in the hope things had got better, as they were not too bad where I live, I decided to go anyway, if nothing else it would get me out of the house for a little bit and there is always a warm welcome and cup of tea or two at the club.

On arriving the weather look flyable to the west, but a bit suspect to the east and the hanger was all but closed, I assumed no flying today! However Mike said we could start on my navigation with a short cross country and gave me the route to plan while he went to get the aeroplane out of the hanger. A little while later another student arrived to take his Navigation exam and Mike returned with the news that the weather was deteriorating so no flying after all. But all was not lost as Mike gave Stuart and I a master class on navigation for a couple of hours and then Stuart took the exam and duly passed (well done Stuart if you happen to be reading this). While Stuart was sitting his exam Mike went through the triangle of velocity,  route planning and use of the whiz wheel with me, also more tea was drunk!

Katie made me feel my age when she asked “what’s a slide rule”, yes I’m that old that we had them (just) while I was at school and trying to explain how great they are to someone that has never used one is a challenge in todays world. I also had a flight calculator in my bag of bit I had got off of eBay and Mike was going to show me how to use that also, however the batteries had gone in it and thats why the circular slide rule aka whiz wheel is better! 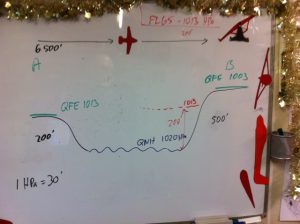 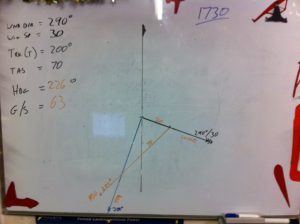 So although not the day I had hoped for and I didn’t get to fly, we did have a really good and informative session on Navigation, I might even have a go at my Nav exam sooner than I was expecting!