It had been 4 weeks since I last flew and I wondered how much I could forget in such a short space of time, well the answer seems to be quite a bit! First off was the order of the checklist, it took a little prompting from Mike, but it was in there somewhere and soon came back!

During the 4 weeks the C42 has had its BRS (Ballistic Recovery System) removed and sent away to have the parachute repacked, to be able to fly it we had to have a new weight and balance done as the allowed flying weight drops from 472.5Kg to 450Kg without the chute in a microlight. We also had an oil thermostat fitted so it will warm up quicker and hold its temperature better, hopefully it will help prolong engine life too.

The aeroplane had not been flow today so was cold, however with the oil thermostat fitted it warmed up very quickly and I was able to do the power check almost by the time I got to it on the check list!

The weather was looking ok and within limits however the wind was blowing directly down runway 29; I have never flown from or landed on 29, it’s a lot shorter and narrower than our other runways and for good measure there are some cables on the approach too!

Take off was no problem and with the wind we gained height very quickly, we flew out to the west and over March and then turned towards Whittlesey while practicing trimming for 70, 80 and 60 knots, I struggled with this as I knew that for 70 the trim should be neutral and the power set to 4,200 rpm, however this was not working and it took me a while to figure out it was down to the balance of the aeroplane without the chute had changes and therefore I needed some extra trim. After some practice and some initial faffing around this was ok, but needs to be polished in a future solo. Next came unusual and dangerous attitudes, Mike took the controls with me lightly holding the stick and first put the aeroplane in a steep ascent and then said “you have control recover”, the recovery is easy enough, nose down and full power together until the nose is level with the horizon. Next Mike put it into a spiral dive, again this in my mind was OK power off, level the wings ease back on the stick and power on as the speed drops ones back in a climb, only problem I had was I closed the throttle, but not all the way so speed was building fast!

High rate turns was last on the agenda for today and I was pleased that I maintained altitude, however in the first turn I would have failed due to not performing the look out before the manoeuvre and my turn to the other direction I rolled out to soon, it should have been 360 and I rolled out at 270 degrees, in my defence I did spot another aircraft as we were through 180, but that was not an acceptable excuse!

Now it was time to return to the airfield and we were make slow progress at 3,000ft, Mike asked what I estimated the wind speed at and I guessed 60kn, he then said “well if its 60 up here will it be less or more at 1,500ft”, “less due to the friction of the earth” I said, Mike replied “good, so lets descend to 1,500ft and fly back at 80kn”. At 80 knots it was very bumpy, there was also a light rain storm just off to our left and as we came into land on 29 I was all over the show, it was like being in a roller coaster and I don’t like roller coasters! So we went around, the second attempt was more composed and the storm had moved away so the conditions were better too and we landed ok, it left me feeling quite shattered, but it’s all good experience!

Back on the ground I had with me a replacement bulb for our non-working MR16 halogen landing light. The replacement was a 9W LED and I fitted this after washing the aeroplane down, it’s a lot whiter light and brighter than the old one so long as it lasts, it’s a cheap, easy and good upgrade! 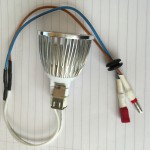 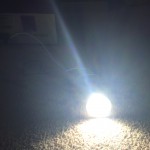 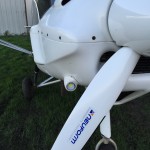